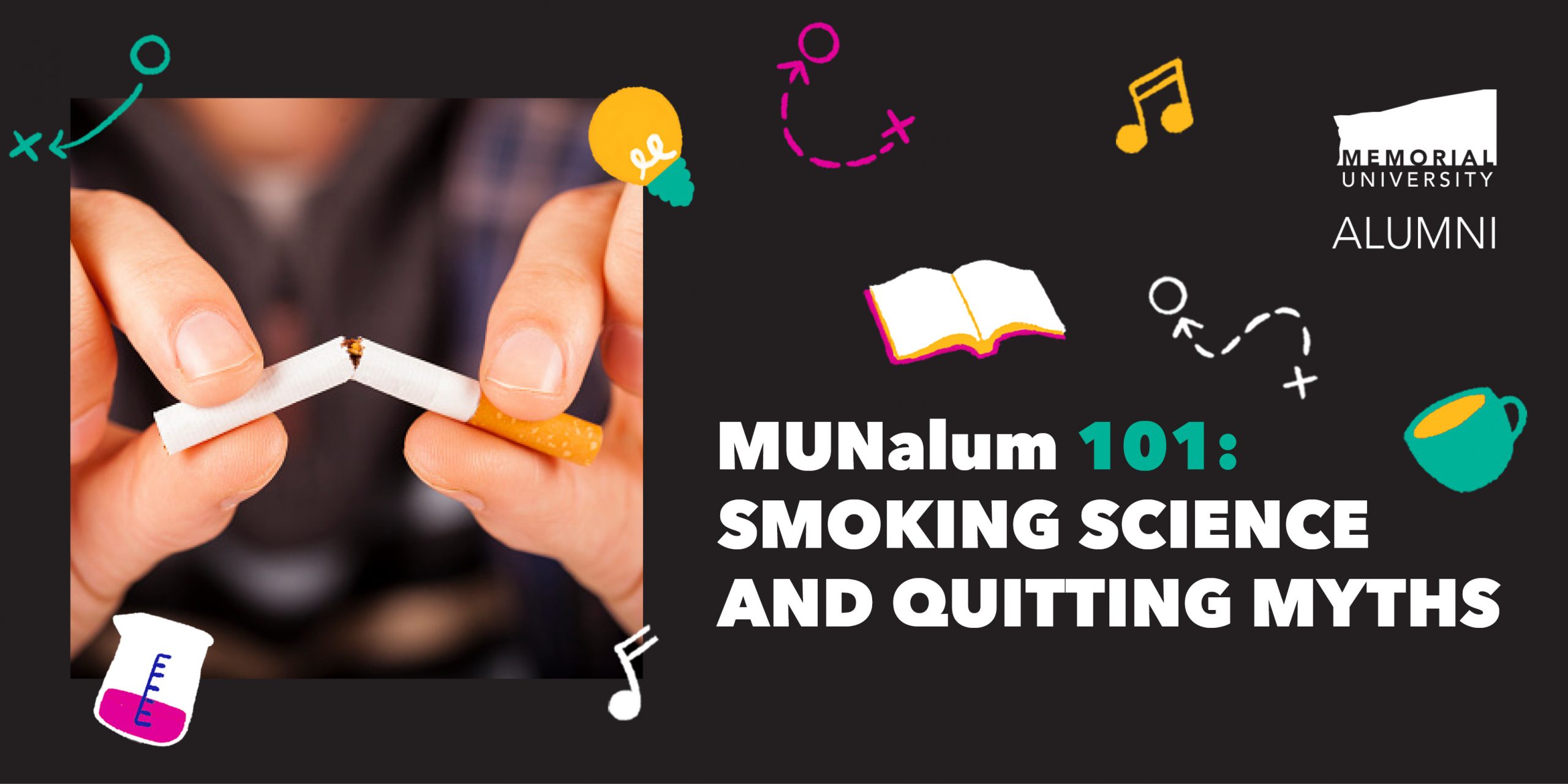 While many understand the dangers to the body of smoking and nicotine addiction, fewer are aware of the science of why it is so difficult to quit smoking.

On January 11, 2022, the Office of Alumni Engagement, in partnership with the School of Pharmacy, will be offering a free event titled MUNalum 101: Smoking Science and Quitting Myths.

Dr. Leslie Phillips (B.Sc. (Pharmacy) ’91), professor in the School of Pharmacy, heads the Smoking and Vaping Cessation Clinic of the Drug Therapy Services Clinic. During the event, Dr Phillips will discuss the mechanisms of how nicotine affects the body and decode misconceptions about quitting smoking.

“Smoking is the leading cause of preventable death in Canada,” said Dr. Phillips. “The number of smoking-related deaths is higher than those due to alcohol, heroin, murder, suicide, traffic accidents, fires and HIV combined. One in five deaths is due to smoking, and one in two smokers die from a smoking-related illness. Twenty percent of smokers develop lung cancer and a third of all cancer deaths are due to smoking.

Most make multiple attempts before quitting for good, but these failed attempts are often unsuccessful for many people. Dr Phillips hopes that by dispelling some myths, tobacco users will be encouraged to keep trying. The only failure is when you stop trying.

“The most effective long-term approach to quitting smoking is a combination of quit smoking medications and behavioral supports. “

Here are five messages from Dr. Phillips as she helps her patients along their quitting journey:

“Quitting smoking is probably one of the most difficult things for patients to do, but it will also be one of their most important accomplishments.” This is because nicotine is perhaps the most addictive substance in society today.

“So let’s say it’s Friday night. You go to a party and there are a bunch of people coming out to smoke. Your amygdala – the short-term winning part of your brain – anticipates pleasure and prompts you to engage in the behavior that leads to smoking again, and you impulsively exit and join others. You smoke, you get a big hit of dopamine as a reward. But, for a fraction of a second, there is an opportunity for another higher brain center – the reflective reward system – to ponder or ponder whether or not it wants to adopt the behavior. It is possible over time for this system to learn to dominate the amygdala, allowing it to suppress short term rewards for long term gain.

“At the smoker’s clinic, we try to choose a formulation based on patient preferences, contradictions and side effects, and affordability. The nicotine patch is long-acting and releases nicotine through the skin for 24 hours. Nicotine lozenges, gums, inhalers and sprays have a short duration of action and are often used in conjunction with the patch to treat cravings. There are also two other prescription drugs and one natural health product that, like nicotine replacement products, can double or triple the chances of quitting smoking. There are a lot of pros and cons to each treatment. Empowering individuals by educating them about smoking cessation options and involving them in treatment decisions improves self-efficacy.

“It’s the least effective way to quit smoking. Most will relapse within 24 to 48 hours of stopping the cold turkey because the nicotine withdrawal symptoms are so severe. “

“Mark Twain said, ‘Giving up is easy… I’ve done it a thousand times. I try to encourage patients to view failed attempts to quit smoking as opportunities to learn why they went wrong and what they might do differently next time. A common belief is that it takes five to seven times to quit smoking. More likely, a smoker tries to quit an average of 30 times before successfully quitting.

If you or someone you love is a smoker, Dr Phillips is hoping you will attend the session.

Register today for this free session to set the stage for a smoke-free future.

Heidi Wicks is a Communications Advisor with the Alumni Engagement and Development Offices. She can be reached at [email protected]