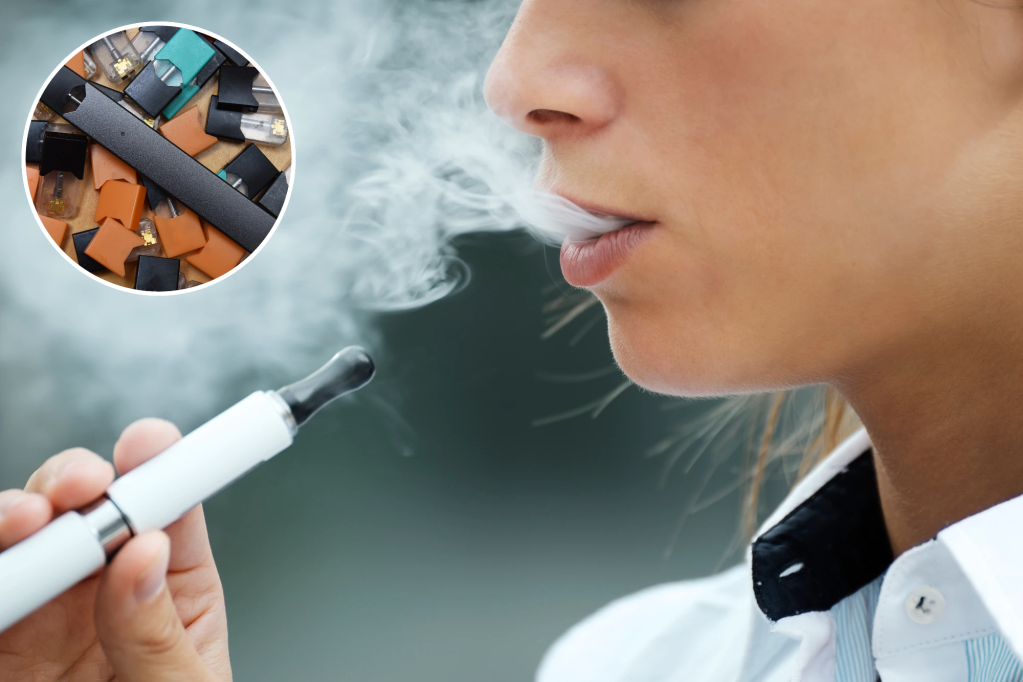 About 2.7 million people in England use these devices, often as an alternative to smoking after quitting.

UK health chiefs are urging smokers to switch to vaping, saying it’s safe and much better than smoking.

Smoking is known to damage the eyes, in addition to being a major cause of cancer and a myriad of others. deadly diseases.

Now scientists say those who use e-cigarettes may also have an increased risk of vision problems.

The new study from the University of California included 1,173,646 adults in the United States between the ages of 18 and 50, The telegraph reports.

The findings, published in the American Journal of Ophthalmology, join others who say e-cigarette use is not without risk.

It also contains propylene glycol, glycerin, flavors and other chemicals that research could be harmful, but on a much smaller scale than tobacco.

Scientists believe that ingredients like propylene glycol in vape liquid produce free radicals – cell-damaging atoms that can weaken the layer of fluid covering the surface of the eye.

It can also promote oxidative stress, a key factor in the development of chronic disease as well as cataracts and glaucoma.

Research shows that smoking increases the risk of several eye conditions such as age-related macular degeneration.

But it’s important to note that at this point it’s not clear whether these risks are related to vaping or something else.

Professor Simon Capewell, a clinical epidemiologist at the University of Liverpool, said the latest California study failed to prove a link between vaping and eye damage.

But he said there were “a lot of nasty toxins in e-cig vapor.”

There have been a slew of warnings regarding the use of e-cigarettes – as a recent discovery that it could increase the chances of erectile dysfunction and stroke at middle age.

The World Health Organization says they “increase the risk of heart and lung disease disorders ”and are“ particularly risky when used by adolescents ”.

But there is growing evidence that the devices can effectively help people quit smoking.

The NHS says: “They’re not completely risk-free, but they carry a small fraction of the risk of cigarettes.

“Electronic cigarettes do not produce tar or carbon monoxide, two of the most harmful elements in tobacco smoke.

“The liquid and vapor contain potentially harmful chemicals also found in cigarette smoke, but at much lower levels.”

E-cigarettes can help you manage your nicotine cravings, and a 2019 study found that people using them with face-to-face support were twice as likely to quit.

About six percent of adults vape, according to a report from Public Health England in February 2021.

Some of them are people who have never smoked before, although this is strongly discouraged.

The report states that nearly 30% of 11-18 year olds have tried a vaping product but have never tried smoking.

There are concerns that the sweet flavors of vape products will entice young people to use them, when they may not have otherwise tried a cigarette.

Non-smokers who begin vaping may face damage they would otherwise have avoided, the Committee on the Toxicity of Chemicals in Foods, Consumer Products and the Environment, an independent advisory body, reported in 2020. the British government.

But the UK Health and Safety Agency (UKHSA), which replaced PHE, says there is “no evidence to support concern that e-cigarettes increase smoking among young people.”

Meanwhile, smoking rates among young people and adults in the UK continue to fall.

England could be the first country in the world to distribute prescription e-cig to people trying to quit smoking, it was revealed in October.

This story originally appeared on The sun and has been reproduced here with permission.