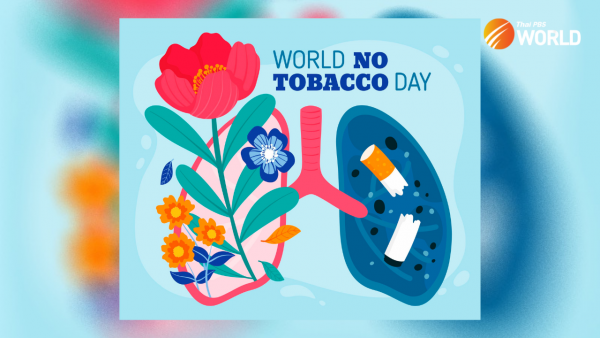 Smoking and passive smoking not only cause cancer and other respiratory diseases, but tobacco use also has a negative impact on the environment, both of which represent a significant burden on public health and the economy.

“Tobacco is killing our planet. Every step in the production and use of a cigarette – from farming to manufacturing and selling to smoking and waste contributes significantly to environmental pollution,” said Dr Olivia Nieveras of the World Health Organization (WHO) in Thailand. She was speaking at a hybrid seminar held last week to mark World No Tobacco Day on May 31, which this year highlights the harmful effects of tobacco on the environment.

Smoking costs Thailand more than 350 billion baht a year in healthcare costs and lost productivity, or about 2.1% of the country’s GDP.

Tobacco cultivation requires intensive use of resources, she added. Each year, around 600 million trees are cut down and more than 22 billion liters of water are used worldwide to make cigarettes. Tobacco farming also uses a range of harmful chemicals that affect the health of farmers involved in production.

Tobacco production emits nearly 84 million metric tons of carbon dioxide annually worldwide. And 4.5 trillion cigarette butts, which are the most littered objects on the planet, are thrown away every year, she says.

Cigarette butts are ruining beaches and poisoning the oceans

Thailand’s once pristine beaches are polluted with large numbers of cigarette butts. This will potentially affect the tourism industry, which is one of the main sources of income for the country if the problem is not solved.

Cigarette butts are a common eyesore on beaches. Small but deadly, these plastic-based filters can also contaminate the oceans when they end up in the sea and kill marine life.

A recent survey of marine debris management by the Department of Marine and Coastal Resources (DMCR), which is responsible for protecting Thailand’s coastal resources, found that more than 100,000 cigarette butts were discarded on major tourist beaches.

“We have found more cigarette butts than any other type of litter on our beaches,” DMCR deputy director Apichai Ekvanakun said, adding that of the 4.5 trillion cigarette butts discarded globally each year, Thailand alone is responsible for 100 million.

Cigarette waste is toxic waste, Apichai noted. The filters contain toxins and chemicals, including nicotine and arsenic, which are used in rat poison, as well as carcinogens that can contaminate the oceans when they dissolve and release the pollutants..

“Butts are toxic to all living organisms and small marine life that come into contact with them,” the deputy director said.

Cigarette butts are not biodegradable and can remain in the environment for more than 2 years and up to 12 years, he added.

In response to this, the department launched a smoke-free and litter-free beaches campaign to limit smoking and the dumping of used cigarettes and litter. Authorities have imposed a smoking ban in public spaces, including beaches.

Violators would face a maximum fine of 100,000 baht or imprisonment for up to a year or both, Apichai said.

At the initial stage, the law has been implemented at 24 popular vacation beaches in 15 provinces, including Bang Saen Beach in Chon Buri, Patong Beach in Phuket and Hua Hin Beach in Prachuap Khiri Khan.

“We should not turn our beaches into ashtrays. To keep everything clean, beachgoers should smoke in the designated smoking area and crush your used cigarettes or cigars in the ashtrays provided,” he said, adding that the department is considering expanding the anti- tobacco to other beaches in order to provide a cleaner, safer and healthier environment for bathers.

It’s not just Thailand. In California, smoking is also prohibited on all state beaches and in state parks. Barcelona in Spain bans smoking on all of its beaches, making it the first country in Europe to do so.

Smoking pollute the air on the beaches

In addition to cigarette waste, some Thai beaches are said to have a high level of exposure to second-hand smoke.

A study of second-hand smoke exposure at two popular Thai beaches found that particulate matter 2.5 (PM 2.5) reached dangerous levels. It was carried out by Professor Assoc Nipapun Kungskulniti from the Faculty of Public Health, Mahidol University and his colleagues.

“We wanted to assess second-hand smoke levels around lounge chairs on the beach and find out how smoking affects air quality. We used instruments to measure an airborne pollutant or PM2.5 that is emitted downwind from areas used by bathers for smoking,” Nipapun said.

The study showed that the average PM 2.5 levels on the beaches were 260 and 504 micrograms (mcg) per cubic meter. Levels peaked at 716 and 1,335 mcg per cubic meter among active cigarette users – 27 times higher than a recommended safe limit.

According to the Pollution Control Department, the so-called safe level in air is 50 mcg per cubic meter.

“Children were playing on the beach when we collected the data for our study. They could breathe in second-hand smoke which can be harmful to them,” the researcher said.

Second-hand smoke from burning tobacco is harmful to health. When people accidentally inhale the vapors while sitting or standing next to a smoker outdoors in public spaces, including restaurants, parks, and beaches, it can irritate their eyes, make them sore head and even make them sick.

Beyond that, exposure to passive smoking can increase serious health risks, according to Thailand’s Action on Smoking and Health (ASH) Foundation. In adults, it is linked to lung problems, heart and cardiovascular disease, and respiratory disease. In children, it simply causes them to cough, sneeze, cause respiratory infections, trigger asthma attacks, or worsen asthma symptoms.

Nipapun supports the DMCR’s tobacco-free zone regulations, noting that it not only helps improve air quality on beaches, but also saves marine life and even human life.

Smoking kills both smokers and non-smokers. In 2017, it killed more than 70,000 people in Thailand, who died of lung cancer, emphysema, pneumonia and tuberculosis. Each year, nearly 7,000 non-smokers die of cancers, heart disease and chronic respiratory diseases due to exposure to second-hand tobacco smoke, according to WHO Thailand.

According to the International Health Organization, tobacco smoke contains around 4,000 chemicals, of which at least 250 are known to be harmful. It also contains carbon dioxide, methane and nitrogen oxides, which are greenhouse gases.

He urged smokers who want to quit to get help and advice from a doctor, which can increase their chances of kicking the habit for good. He also advised smokers to make their homes and cars smoke-free to help them quit.

“Quit smoking and create a smoke-free home for a healthier and happier family and make the earth green again.” the doctor said.