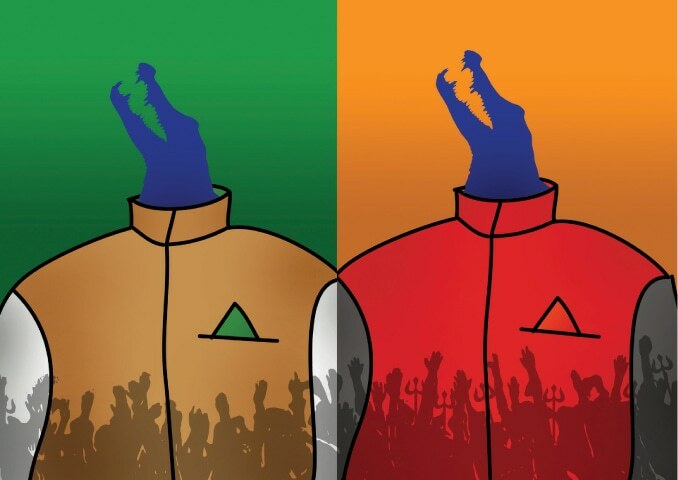 Until the 1980s, there were a few bakeries in the Saddar area of ​​Karachi which were famous for their Christmas cakes and hot rolls. They were particularly appreciated by the Christian community of the city, mostly made up of Catholics, and whose elders had started to migrate from the Indian state of Goa, mainly from the 19th century. Being one of the most important communities in the education sector during Pakistan’s first decades, it was Christians who largely ran and managed the many schools the British had built in Karachi. The population of the community was mainly concentrated in the Saddar region.

In the mid-1980s when I was a student at a college in Saddar, I often used to visit the aforementioned bakeries, especially at Easter and Christmas when the bakeries stacked their shelves with the most wonderful cakes and hot rolls.

The owners and workers of the bakeries were all Muslims. Once in 1986 when, with a few college friends, I visited one of our favorite Saddar bakeries just before Easter, an elderly employee, Munawar, laughed at the bakery that the bakery was visited by two “well-heeled” men who had asked her why they were baking Christmas cakes and greeted Christians with a “Merry Christmas”.

Munawar said he told them, “Because business is business, and a cup of tea is a cup of tea!” It made us laugh. It was a dialogue that actor Qavi Khan made famous in a 1970s Urdu film. Munawar used it to mean that they were selling Christmas cakes and greeting their Christian customers because it was good for them. business, and it also helped to maintain a good relationship with them.

Contrary to modernist theories on the links between class and religiosity, it is the upper and middle classes of South Asia who have become the standard bearers of religious exhibitionism.

Muslim bakery workers were not residents of Saddar. Most of them came from the popular and lower middle class areas of the city. Perhaps this is why Munawar made sure to tell us that the men who weren’t happy with what he was doing were “well off.”

Recently, two bakeries in Karachi, both located in wealthy parts of the city and owned by “well-to-do” people, reportedly refused to write “Merry Christmas” on their cakes. Questioned on social media, the owners of one of the bakeries explained that it was an individual act on the part of an employee – even though a similar episode had occurred at the same bakery in 2018 The other bakery is based in a bungalow owned by a wealthy person.

Read: 10 bakeries in Karachi selling Christmas cakes and catering to all foodies

So why would educated “modern” people have a problem wishing a Merry Christmas, as opposed to working class men like Munawar? This is an important question. The answer can upset the understanding of class and religiosity. In a 2004 study, Harvard sociologists Pipa Norris and Richard Inglehart argued that the poor are almost twice as religious as the rich. But Indian historian Meera Nanda thinks the opposite.

In his book God’s market, Nanda writes that in South Asia, exhibits of excessive religiosity are more common in upper and middle class segments. Norris and Inglehart had simply reinforced a long-held “modernist” theory that education and economic prosperity diminish religiosity and relegate it to the private sphere.

But in today’s so-called “post-secular era”, the concept of secularism has been flexed considerably to allow for public and political displays of religiosity, more than it was some 35 years ago. . Therefore, it is increasingly evident (at least in South Asia) that middle and upper income groups are more active in this regard than the classes below. According to Nanda, the reasons are economic.

She writes that the economic liberalization of the 1980s in societies whose economies had been heavily regulated and centralized produced a curious phenomenon: as economic regulations by state and governments became more flexible, deregulated economic activities took hold. merged with religious activities. This may be due to the fact that economic regulation, and even so-called mixed economies, were seen as “socialist”. This did not suit upper and middle income groups in India and Pakistan, nor religious groups who denounced them as anti-religious.

Just before the 1970 elections in Pakistan, the Islamist Jamaat-i-Islami (JI) lambasted the “socialism” of the Pakistan Peoples Party (PPP) for its “atheist”. The point is that the PPP actually only offered a mixed economic system. JI then claimed that the land reforms that some “left” parties suggested were contrary to the dictates of Islam.

Economic regulation and the type of economy it produced began to be seen by some as opposed to the interests of the middle and upper classes. And as some of the early political opponents of this economy were Islamist parties in Pakistan – and Hindu nationalist groups in India – they began to be facilitated by successful traders and industrialists.

During the 1977 movement against the first PPP regime, industrialists and traders massively financed the demonstrations, in particular the religious parties which were at the forefront of the movement. The late political scientist Khalid B. Sayeed, in his 1980 book The nature and direction of the change, writes that the protests were mainly carried out by the middle classes, the “petty bourgeoisie” and the traders.

As a result, many beneficiaries of a now deregulated economy have become openly exhibitionist about their faith. Even the lifestyle liberals among them made no secret of their sympathy for political conservatism and Islamist views.

In India, the right-wing BJP won an overwhelming mandate in elections for the country’s middle-income groups. The party also has nascent relationships with some of India’s wealthiest entrepreneurs. The same was true of the Muslim League of Pakistan-Nawaz (PML-N) and, subsequently, of Pakistan Tehreek-i-Insaf (PTI) in Pakistan. The PTI signaled neoliberal economic policies, but presented them as an economy without corruption that would wipe out the “elites.” The party has also usurped the rhetoric of religious parties. The holiday has become the epitome of the economical marriage between high / middle income groups and religious dress.

According to the seminal theories of modernization, the upper and middle classes were expected to adopt and proliferate progressive currents in politics and politics. But these classes in South Asia may have become strange patrons of religious radicalization.