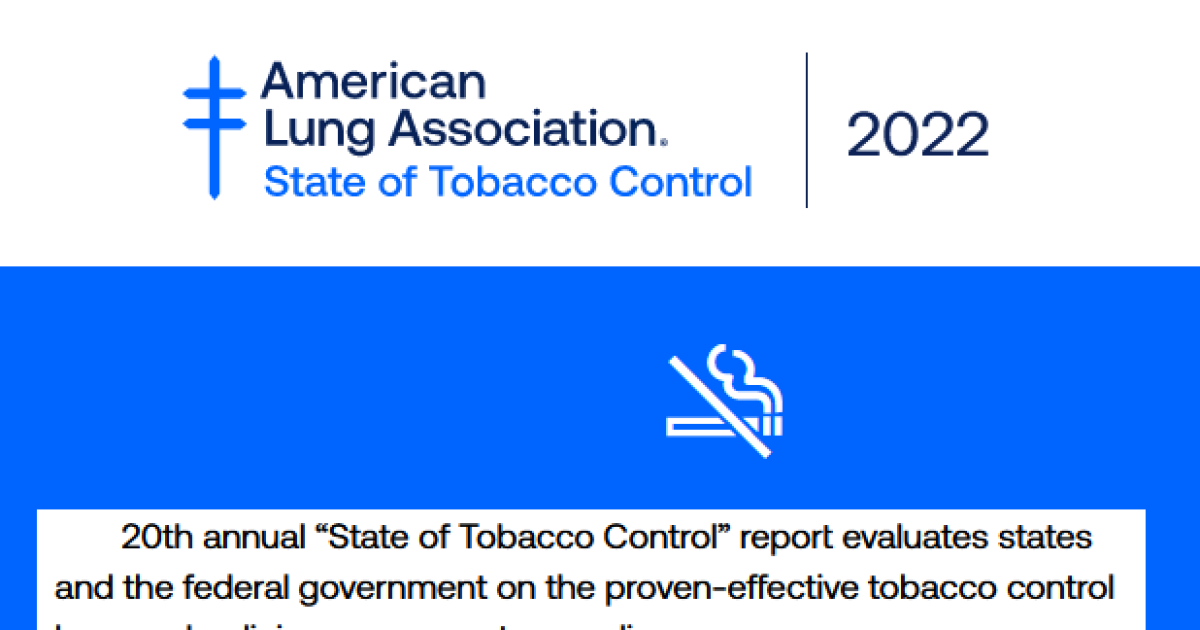 The American Lung Association has released its 20th annual “State of Tobacco Control” report, which assesses efforts to reduce tobacco use.

“Tobacco use remains one of our leading causes of preventable death and disease in the state,” Summerfield said. “It accounts for over 28,000 lives every year. And the rates are still too high, the adult smoking rate is 12%. The high school smoking rate is over 25%. And it’s been very expensive for the state. That’s over $10 billion a year that’s costing the state. When you look at the ratings from New York, and I’ll also throw in there, Massachusetts, they’re pretty good in the state. um together, when you look at the report total, and for a long time, you know, states like New York and Massachusetts are considered leaders in public health, and specifically in tobacco control policy. But you’ll see specifically in New York they received failing grades when it came to funding state tobacco prevention programs, as well as ending the sale of all flavored tobacco products.”

Vermont, Massachusetts and New York all received A grades for smoke-free air. Connecticut received a B. Vermont earned an A for its efforts to give residents access to withdrawal services.

The report says that despite receiving more than $1.8 billion in tobacco settlement payments and tobacco taxes, New York is only funding tobacco control efforts at 21% of the level recommended by the Centers for Disease Control and Prevention. The report reveals that tobacco-related problems cost Vermont $348 million a year. In Massachusetts, legislation was introduced to increase the tobacco tax, but the legislature was slow to take further action.

“Last year, Massachusetts completely banned menthol and all flavored products,” Summerfield said. “So they’re great, they’re better in that category, of course. But when we look at this stuff, I mean, we really want to make sure everything is funded properly, we want to make sure the products are off the marketplace to encourage people to quit smoking, and the services there, such as quit lines and cessation services, are there to help people quit smoking as well. , we want to remove these flavored tobacco products from the market.”

Thomas Carr is ALA’s national policy director and author of the report. Carr says 80% of black Americans who smoke currently use menthol cigarettes, which he attributes to tobacco industry targeting.

“There are particularly high rates among older adults, as gay, bisexual adults, as well as Native Americans, Native Americans, and Alaska Natives,” Carr said. “So those are two populations where we stay and then I think the other kind of key finding is that we see menthol, I think the use of menthol is high among a number of communities that may employ us, but especially the black community.”

According to Carr, as part of efforts to reduce the number of young people using tobacco products, the United States Food and Drug Administration has pledged to release proposed rules to ban menthol cigarettes and cigars. flavored by April. Connecticut and Vermont were rated F on their report cards for their efforts to reduce the use of flavored tobacco products, New York got a D, Massachusetts an A.

Carr adds that while the country as a whole has made substantial progress in advancing tobacco control policies over the past 20 years, including comprehensive tobacco control laws in more states, the federal government is getting “most time failing grades for its tobacco prevention and reduction efforts.”

“What we found was that adult smoking rates dropped from 21.6% in 2003 to 14% in 2019, a 35% drop,” Carr said. “What we’ve also seen is kind of a new generation of tobacco products, especially e-cigarettes, and flavored tobacco products are threatening that progress.”

Altria Group, the parent company of Philip Morris USA and US Smokeless Tobacco Company, did not respond to a request for comment in time for the broadcast.

Are we seeing the first signs of common ground in tobacco control in the United States?