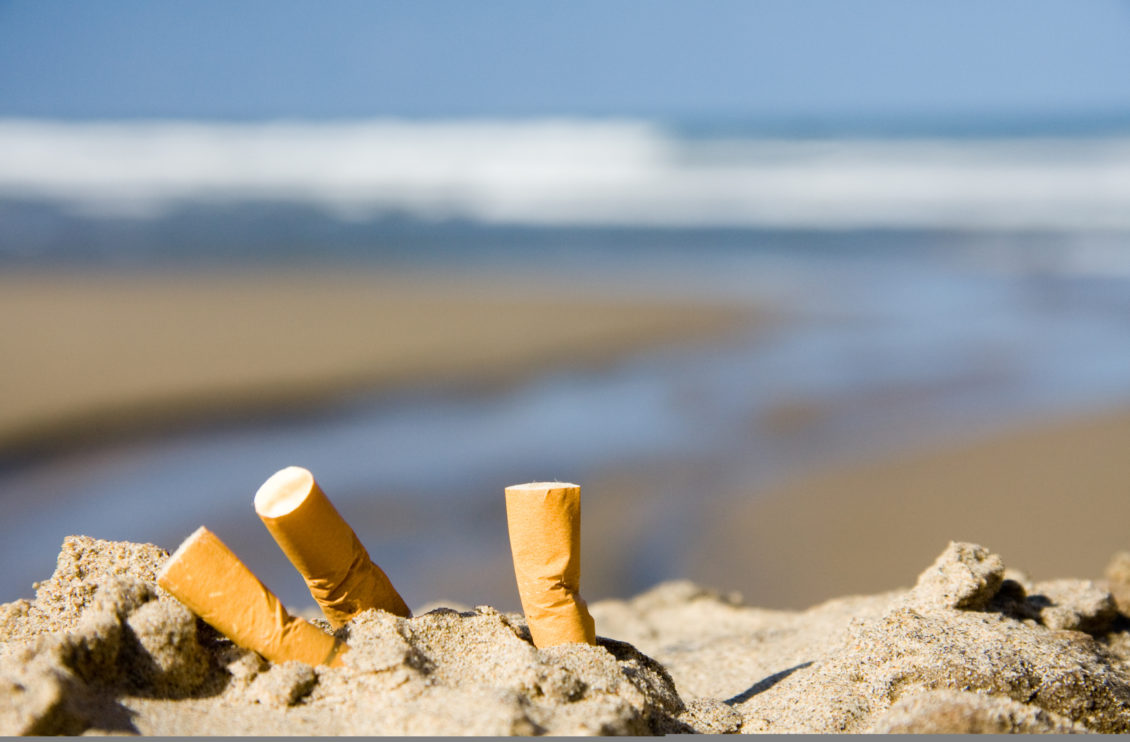 Port Eynon has become the third beach in Swansea to join the Smoke Free Beaches campaign, an initiative which aims to limit the harm of cigarette litter to local wildlife and the environment.

From April this year, visitors to the beach will be encouraged not to smoke via a voluntary non-smoking initiative, which will be posted at the main entry points to the beach. The voluntary change will seek to reduce cigarette waste, with the aim of protecting the coastline for future generations.

Globally, 4.5 trillion cigarette butts are thrown away each year, making cigarette butts one of the most polluted objects in the world. Cigarette butts take up to 12 years to decompose, and in the process, they release nicotine and heavy metals before turning into microplastic pollution. Additionally, studies looking at the toxicity of cigarette butts have found that they contain around 4,000 harmful chemicals, which can ultimately leach into the environment. Research has shown that a cigarette butt left to sit in water for 96 hours releases enough toxins to kill half of saltwater and freshwater fish exposed to it.

The new smoke-free initiative was led by tobacco control organization ASH Wales, a charity that raises awareness of the harms of tobacco in Wales. The charity has worked closely with Swansea Council, which has shown support for the green initiative.

ASH Wales CEO Suzanne Cass praised the Council for its proactive approach to the environment. She said: “We are delighted that Swansea Council has taken proactive action to protect the coastline, which will contribute to wider efforts to create a greener and more sustainable Wales.

Beyond the environmental benefits, research has shown that smoke-free spaces can reduce exposure to second-hand smoke and can positively influence social norms. In light of this, ASH Wales believe the smoke-free initiative will create a safer and ultimately cleaner environment for visitors.

Last year, ASH Wales conducted a survey to gauge local public opinion on the smoke-free initiative. The survey found that 92% of participants were in favor of Port Eynon becoming smoke-free, when told of the environmental benefits it would bring. Additionally, 96% of all survey respondents agreed that cigarette waste has a negative impact on marine life and the environment.

Anne Ellsmore, owner of local business The Seafarer, welcomed the decision and said: “Any initiative to limit the amount of cigarette litter on our beach is a good thing and will make it a nicer place for people to visit. tourists and locals.”.

To date, Langland Bay, Caswell Bay and Little Haven in Pembrokeshire have joined ASH Wales’ Smoke-free Beach campaign. It is believed that the addition of Port Eynon, one of the most popular sites on the Gower Peninsula, will encourage other beach authorities to take similar green action.

A Swansea Council spokesperson said: “The Council fully supports initiatives to protect the coastline for residents, visitors and future generations to come.

“We hope the voluntary initiative will encourage visitors to take the small steps needed to make a big difference in protecting our environment.”

Nationally, the Welsh Government recently pledged to reduce the environmental impact of smoking. The commitment was recently echoed in the new Tobacco Control Strategy for Wales, which aims to create a healthier smoke-free nation by 2030. The Deputy Minister for Mental Health and Well-being being, Lynne Neagle, oversees the new strategy and stressed the importance of limiting the harmful effects of smoking. She said: “It is essential that we recognize that smoking not only impacts our health, but can also impact our environment.

“I fully endorse any work that highlights the environmental harms of cigarettes and takes steps to limit those harms.”

how to quit smoking today