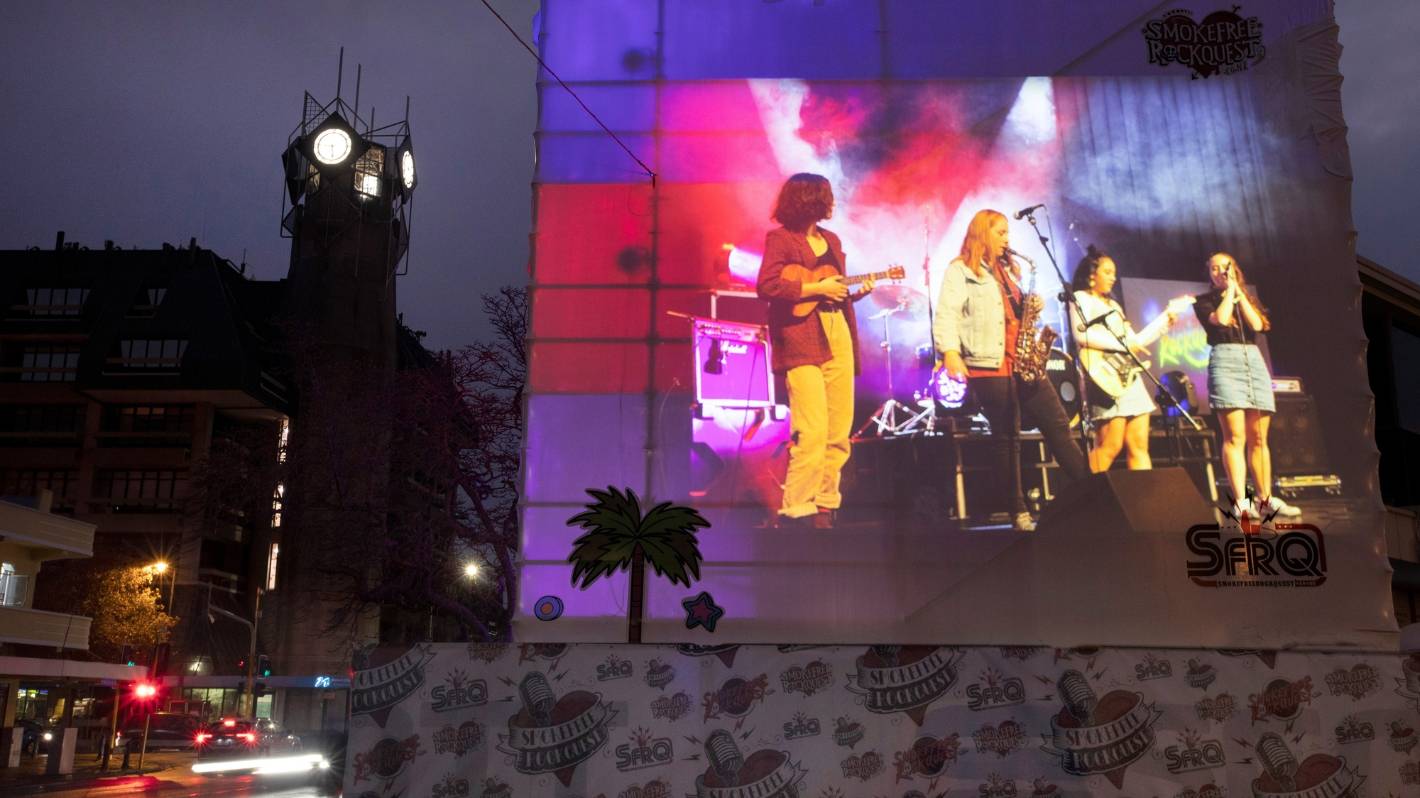 Images celebrating 35 years of Rockquest are projected onto the scaffolding at Millers Acre in Nelson.

For 35 years, Smokefree Rockquest has been helping teens nationwide thrive on music, and now it’s lighting up Nelson.

Until June 12, an art and light installation celebrating 35 years of Rockquest will illuminate the exterior of the main parking lot building Nelson’s Millers Acre at night, from dark until late. The images are projected onto a protective white film that is currently covering the building as part of a rehab project.

The installation, facilitated by Make/Shift Spaces in partnership with Rockquest Promotions, features eye-catching imagery helping to tell the story of the Rockquest journey through the decades.

There is also an ongoing showcase exhibit at the Millers Acre complex which has an interactive component to help tell the story, including videos with music, interviews and highlights.

Nelson-based Rockquest Promotions founders Pete Rainey and Glenn Common began running Rockquest in 1989 in Christchurch, a year after it was first owned by a Christchurch radio station in 1988.

Now a national competition for young people featuring original live music, regional Smokefree Rockquest competitions are held across the country, with approximately 2,700 teens taking part each year. This year, the Nelson round will take place on June 10, with a national final taking place on September 23 in Auckland.

Rainey said he and Common – who met as teachers in Christchurch – are thrilled Rockquest is heading into its 35th year and still going strong. He had been based in Nelson for about 25 years.

“It’s kind of an acknowledgment that students are really still excited about playing live music on stage,” Rainey said.

“Young people’s enthusiasm and desire to express themselves is stronger than ever.”

He said the art screenings and exhibit, called Rock! 35 Years of Rockquest, looked at various aspects of Rockquest, including its history, different musical genres, some of its many successes, and the impact on the music industry.

“The majority of New Zealand musicians currently performing would have had contact with the Rockquest competition at some point in their formative years,” Rainey said.

The art and light installation brought a bit more color and life to the city, he said.

The Smokefree Rockquest 2022 competition would kick off in Nelson on May 19 at a reception with special guest Julia Deans, singer of Fur Patrol and 1991 Rockquest finalist.

To celebrate the 35th anniversary, live events will also take place at various venues across Nelson over the next six weeks, Rainey said.

Anne Rush of Make/Shift Spaces said the outfit has been trying to tell the Rockquest story for quite a while.

Make/Shift Spaces is an ongoing non-profit project in Nelson, with the aim of revitalizing the city center by using empty commercial spaces for temporary exhibits, exhibitions and art installations.

The exhibit and light installation would appeal to a wider audience than just teenagers, Rush said, as early Rockquest entrants would now be approaching their 50s.