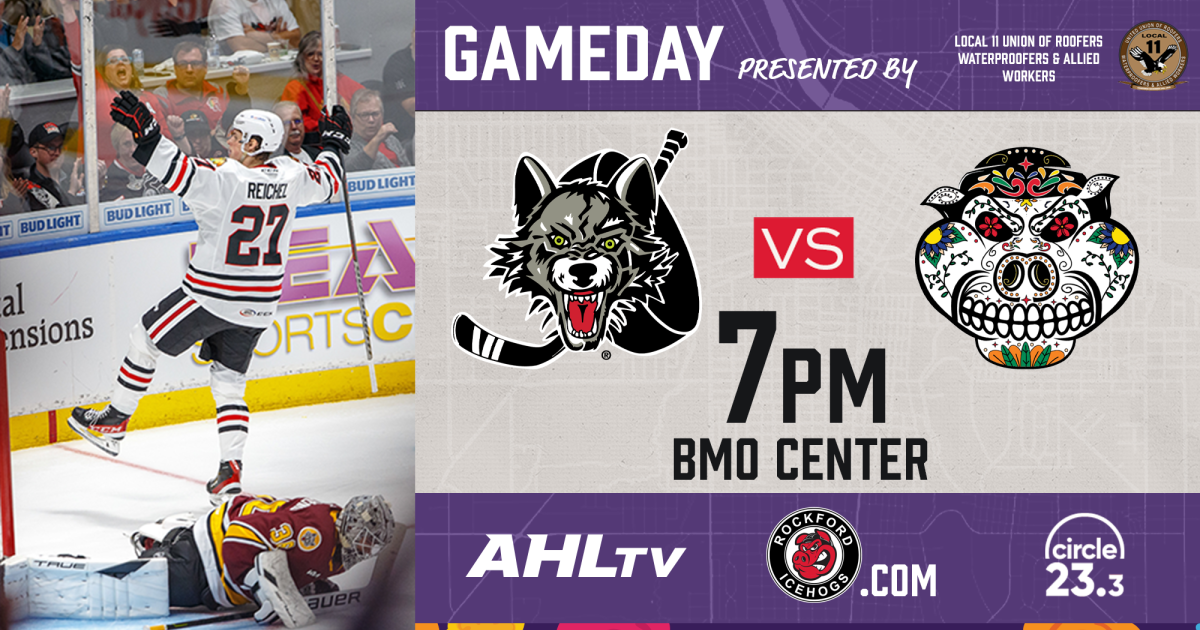 The Rockford IceHogs step up Illinois’ rivalry with the Chicago Wolves at BMO Center tonight at 7:00 p.m. Tonight is the second of 12 head-to-head matches between the two clubs. Get the latest game information in the Local 11 Roofers and Waterproofers Game Overview!

Celebrate Dia de los Muertos (Day of the Dead) night, complete with face painting, costumed characters and special performances. Start the weekend with $2 beers $2 Beer Fridays! $2 beers can be purchased at most lobby concession stands until the end of the second intermission.

Know before you go – Join us tonight at BMO!

Your phone is your ticket: Make sure you have downloaded the latest version of IceHogs App to ensure that you are able to save your tickets on your phone before arriving at the arena.

Car park: Cash will no longer be accepted in downtown parking lots. Pre-purchase parking is highly recommended and can be done through the IceHogs mobile app, ABM app, or ParkWhiz app. Once you have purchased your car park, pre-load your license plate into the system for contactless entry or pull the associated barcode to scan it at the car park gate. See below for more detailed parking instructions.

Cashless Arena: The BMO Center is a cashless arena, but cards are accepted for all purchases in the arena.

Non-re-entry policy: In accordance with ASM Rockford’s new policy, the BMO Center is now a smoke-free, non-re-entry facility. Please plan accordingly as a new ticket must be purchased if you decide to leave the building.

Bag and Game Day Policy: Please read our bag and game day policies for complete information for your visit to the arena.

Pedestrian bridge: Due to critical structural repairs to the bridge connecting the Church Street parking deck to the BMO Center, the bridge will not be usable for the foreseeable future. Please go to the ground floor to use the nearest BMO Center entrance.

New public Wi-Fi: Part of the new improvements to the BMO Center this year include new Wi-Fi to keep you connected to all things IceHogs. Once in the arena, log in to @BMO CENTER PUBLIC. No password is required.

Fansaves: New for IceHogs fans this year, the IceHogs have teamed up with FanSaves to offer special offers throughout the season. FanSaves will also be where we send promotional in-game activations like Culver’s High Scoring Offer, Great Clips First Goal Offer, and more! To get in on the action, follow the IceHogs on FanSaves (link located on the IceHogs app).

Players to watch
After four games, forward Lucas Reichel (2G, 4A) leads the IceHogs in points this season at six. Behind Reichel, forwards david gust (1G, 3A) and Luke Phillip (3G, 1A) are tied on points at four.

Ring the bell on turn 2
The Rockford IceHogs heat up their rivalry with the Chicago Wolves tonight. Wolves won the first of 12 head-to-head matches on October 22 in a 4-1 win at Chicago. After tonight’s battle, the IceHogs won’t see the Wolves until November 18 at the BMO Center.

Pigs in motion
Thursday saw not one, not two, but THREE trades impacting the IceHogs. The Blackhawks received the forward Cameron Hillis of the Montreal Canadiens and defender Cooper Zech Philadelphia Flyers in exchange for a defenseman Nicolas Beaudin (MTL) and before Evan Barratt (ISP). The IceHogs also received future consideration from the Laval Rocket in exchange for a forward. Riley McKay.

Let’s celebrate 100 games
Defender Isaac Phillips is about to play his 100th professional game at the BMO Center tonight. After making his professional debut with the IceHogs on February 13 of the 2020-21 season, Phillips picked up his first professional point (1G) against Chicago three days later. Phillips scored 25 points (10G, 15A) in 64 games for the IceHogs last season.

Celebrate Halloween with the IceHogs on Saturday, October 29 against Belleville
Join the Rockford IceHogs for a spooky celebration tomorrow, Saturday October 29 against the Belleville Senators at 7 p.m. Wear your favorite Halloween costume and enter the costume contest and stick around after the game for a sleight of hand with your favorite IceHogs players! Buy your Halloween tickets here!

Tune in LIVE on the IceHogs Broadcast Network presented by BMO
Watch and listen to every game this season on the IceHogs Broadcast Network presented by BMO! Listen from your favorite device, at home or on the go on IceHogs.com and the IceHogs app and watch live on AHLTV and selected games on 23.3 Circle TV! Fans can also listen to all local Mid-West Family stations, including 104.9 The X, B103, 95.3 Taurusand Rockford Greatest Hits 100.5 and featured on Current of the Rock RiverStateline’s premier source for local events, news and culture.

How to fix your finances before the holidays

Can dogs detect your stress?