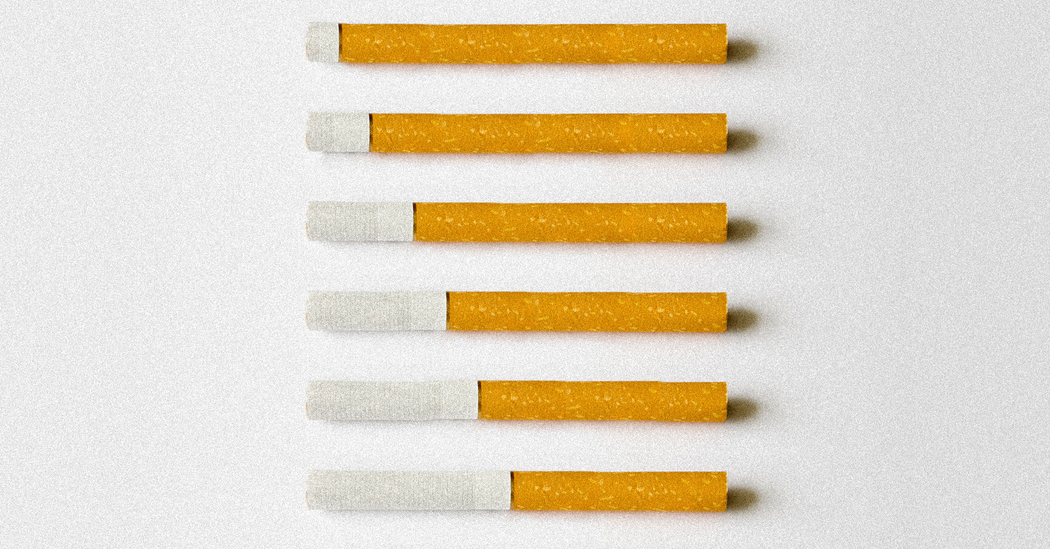 The Food and Drug Administration recently proposed lowering the nicotine content of cigarettes to less addictive levels. If passed, these regulations would finally put to the test one of the tobacco industry’s pet claims: that smoking is a choice. Presenting smoking as a voluntary, personal decision has long allowed tobacco companies to promote cigarettes while acknowledging their deadly risks. But the individual choice paradigm has also guided cigarette regulation, ironically reinforcing the industry’s main talking point – until now.

Nicotine is the addictive element of a cigarette. By reducing nicotine levels in cigarettes, federal regulations will, for the first time, address the main driver of cigarette consumption, which kills 480,000 Americans each year. The effects of nicotine are particularly acute during adolescence, which is when most smokers begin.

Tobacco companies have long understood that physiological nicotine addiction – or what executives preferred to call nicotine satisfaction – is at the heart of their business. Since the 1960s, the tobacco industry has manipulated ammonia levels in cigarettes to enhance the effects of nicotine. As a research director for a cigarette company remarked in 1954, “Lucky us that cigarettes are a habit they can’t break.”

Publicly, tobacco advocates have argued that smoking is a choice of free and responsible adults. As early as 1929, the United States Patent Office granted patents to engineers who had developed processes for denicotinizing tobacco. But as a 1935 pamphlet from the American Tobacco Company reassured its readers, “Manufacturers of Lucky Strike cigarettes deliberately refrain” from such techniques because “such nicotine removal produces an emasculated product, stripped of the very qualities that give a cigarette its character and appeal”. Selling cigarettes has always been about selling both the illusion of choice and a product designed to prevent it.

Ironically, the case for individual consent was even bolstered by early federal cigarette regulations – some of which the industry has quietly praised. After the surgeon general released the landmark 1964 report on smoking and health, policymakers debated how they would hear his call for “appropriate corrective action” to address the deadly health threat posed by the cigarettes. The Federal Trade Commission’s proposal for warning labels on cigarettes that explicitly linked smoking to cancer and death were preceded by the warning label proposed by a pro-tobacco Congress: “Caution: Smoking cigarettes can be dangerous to your health”. These labels, whose urgency has intensified with each revision since 1966, seem to place the onus for smoking on the shoulders of the smoker. After having been duly warned, it is up to the smoker to decide to smoke and to assume the consequences.

To circumvent the power the tobacco industry held in Congress and in the courthouses, anti-tobacco activists in the 1970s and 1980s launched a different strategy. Workplace laws and rules aimed at reducing public smoking – such as the establishment of non-smoking sections and smoking sections, indoor bans and even outdoor bans – have been enacted on behalf of non smokers. Regardless of a smoker’s decision, non-smokers have never accepted second-hand smoking. An anti-smoking bumper sticker from the late 1970s satirized the risk-acceptance paradigm: “Warning: Your smoking may be hazardous to my health.”

The non-smokers’ rights movement catalyzed a sharp decline in smoking rates. But that left the paradigm of individual consent intact – or even reinforced. For non-smokers’ rights activists, the smoker can pursue their choice with full knowledge of deadly consequences as long as their choices do not affect others. “I wouldn’t mind if a smoker killed himself in private,” said a non-smoker in support of public smoking restrictions in 1978. “I strongly object to him infect my air.”

In recent decades, age restrictions on smoking have reinforced the idea that smoking is the choice of fully consenting adults. After fighting such laws for decades, cigarette companies supported 2019 legislation that raised the minimum purchase age from 18 to 21. While the industry once feared such laws would “empty our key young adult market”, in the words of a strategy document from Philip Morris. , he now embraces them as a way to preserve “adult choice.”

“We can’t defend continuing to smoke as a ‘free choice’ if the person was ‘addicted,'” one tobacco lobbyist observed more than four decades ago. And yet, that is precisely what the industry has done – with the unwitting blessing even of anti-tobacco lawmakers, whose rules have granted cigarette engineering validity while making it increasingly difficult, costly and stigmatized for being a smoker.

The FDA’s nicotine proposal is finally an opportunity to test one of the industry’s leading proposals. Only then will we truly see if smoking is a free adult choice rather than a consequence of addiction and skillful product design.

The fact is, most smokers want to quit. Despite all the industry’s insistence that cigarettes are an emblem of individuality, almost 70% of adult smokers would rather not. More than half of the country’s 31 million adult smokers attempt to quit each year, and only 7.5% succeed.

A study has found that reducing nicotine levels could save an estimated 8.5 million lives over the next 80 years – the lives of current smokers who will find it easier to quit, as well as the lives of potential smokers who will never become addicted. It will save millions more from tobacco-related heart and lung disease and the unquantifiable grief that comes with watching loved ones suffer from prolonged, preventable illness. Such a resounding victory for public health is only possible with the kind of regulation that rightly targets not individual smokers, but the cigarette itself.

Sarah Milov is an associate professor of history at the University of Virginia and author of “The Cigarette: A Political History.”

The Times undertakes to publish a variety of letters For the editor. We would like to know what you think of this article or one of our articles. Here is some tips. And here is our email: [email protected].

Fired Up: Backyard Bosses Grill and Smoke their way to tasty feasts