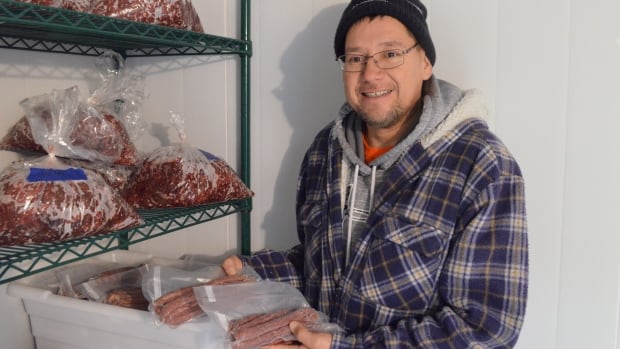 Pride is clear in Tim Ruth’s voice as he walks through the newly opened butcher’s shop at Red Rock Indian Band, enthusiastically showing off the new machines.

But Ruth is adamant it’s more than just a butcher’s shop.

Its name, Maamawitaawining, translates to “at the place of assembly”.

After four years of creation, Ruth said the store would improve food security in the First Nation, increase access to wild game, and create a place to come together and share for the community.

â€œHaving game at the table is an important part of going back to our traditions and eating healthier foods,â€ said Ruth.

It will also allow the community to have more control over their own diet and food system.

The project is also having a ripple effect throughout the region, with other First Nations interested in building their own similar projects.

â€œWe were told that we were the pioneers to have a facility like this,â€ said Ruth.

Community members organized a march, with a final stop at the butcher’s shop, where a great feast was prepared.

â€œIt was overwhelming to see so many people here on opening day,â€ said Ruth. “The atmosphere was amazing, so many smiling faces and everyone participating.”

A group of young people had a successful moose hunt and they were processing their meat that day, with community members and elders helping them butcher the moose and share traditional teachings.

Dozens of walleye were brought in, along with smokies and other treats.

â€œIt was amazing,â€ said Ruth with a big smile.

Since then, the store has been used to process seven moose collected by members of the community.

The walk-in freezer still holds some of the walleye and about 70 kilograms of ground moose meat.

But Ruth has a plan for this meat. He hopes to bring in butchers from the area who could run workshops to teach community members how to make sausages and pepperettes, as well as how to use some of the newer equipment like the smokehouse and dehydrator.

There are also conversations to host a tanning workshop, to share knowledge on how to tan and work with moose and deer hides.

â€œWe also want someone in the store to be properly trained to be a full-time butcher, as part of the five to six year plan,â€ said Ruth.

“We hope to have a little grocery store here for the community and a place where we can store some meat.”

Ultimately, Ruth said they were working to make the butcher shop economically sustainable.

Other projects in northern Ontario to advance food sovereignty

Jess McLaughlin said the butcher shop is a prime example of the benefits that can come from empowering First Nations to take control of their own food systems.

She is co-lead with Gaagige Zaagibigaa, a funding organization with a budget of approximately $ 1.9 million focused on supporting Indigenous food sovereignty projects in northern Ontario.

The organization, which funded the butchery project, is one of four similar groups across the country.

Most public funds for food projects in Canada, McLaughlin said, are determined by the immediate ability to generate economic benefit, or for emergency needs like food banks.

“It’s like, here, have a Kraft dinner, or make a profit, or you are not eligible for this funding.”

Gaagige Zaagibigaa and the three similar organizations are trying to fill a gap by providing money to build the capacity of communities, she added.

McLaughlin said some of the other projects funded by the group include a large community garden in Sandy Lake First Nation, a reverse osmosis machine to help brush maple sugar, and the construction of a smokehouse in the backyard. ‘a family to smoke fish and moose meat.

â€œIt really puts control back into the communities. “

parenting advice from Care and Feeding.