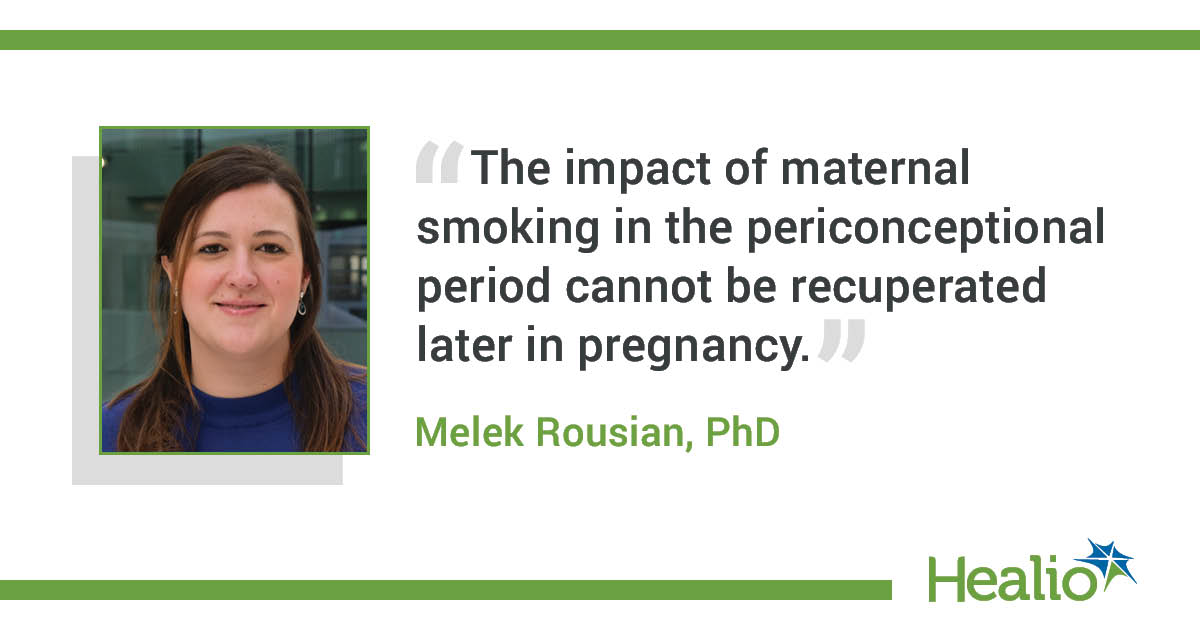 
ADD A SUBJECT TO EMAIL ALERTS

Receive an email when new articles are published on

Please provide your email address to receive an email when new articles are published on .

We have not been able to process your request. Please try again later. If you continue to have this problem, please contact [email protected]

According to results published in human reproduction.

“Maternal smoking is known to cause adverse pregnancy outcomes such as smaller fetal growth measurements and lower birth weight,” Melek Rousian, PhD, the principal investigator of the OB/GYN department of Erasmus MC, University Medical Center Rotterdam, the Netherlands, told Healio. “We were interested in a more comprehensive examination of the human embryo rather than just embryonic growth parameters such as crown-rump length.”

Rousian and colleagues recruited 689 women – 96 of whom smoked – with an ongoing singleton pregnancy of less than 8 weeks’ gestation between 2010 and 2018 and followed up to 1 year postpartum.

Participants underwent serial transvaginal 3D ultrasounds between the 6th and 12th week of gestation. The researchers used measurements taken during ultrasound scans – which were performed weekly from 2010 to 2013 and every two weeks after 2013 – to assess morphological development. They assigned Carnegie Stages 12 through 23 based on internal and external development.

Participants reported sociodemographic information, medical history, and lifestyle behaviors through questionnaires; the researchers asked about specific smoking habits, such as the number of cigarettes smoked daily and quitting, if any.

Periconceptional smoking, measured in cigarettes per day, had a nonsignificant association with delayed Carnegie stage. Smoking 10 or more cigarettes a day was most strongly associated with developmental delays, delaying the final Carnegie stage by 0.9 days.

Among women who conceived by IVF/ICSI, those who smoked at least 10 cigarettes a day reached the final Carnegie stage 1.6 days later than the others.

“The compelling effect in the IVF/ICSI population may be due to very strict pregnancy dating,” Rousian said. “On the other hand, it is also said that due to the technique itself, IVF/ICSI pregnancies are more sensitive to external exposures. In addition, the effect of tobacco smoke could also be amplified in women achieving pregnancy after IVF/ICSI since these women were exposed to a combination of the risks associated with the assisted reproductive procedure and the compounds in tobacco smoke causing other developmental disabilities.

“We were surprised to see that the delay in morphological development in the early embryonic stage of pregnancy had an effect on growth parameters later in pregnancy and even on birth weight,” Rousian said. “The impact of maternal smoking in the periconceptional period therefore cannot be recovered later in pregnancy. This may imply that we should advise women who are trying to conceive to quit smoking before pregnancy, as there is already a lasting adverse effect on the baby/fetus in the very early stages of pregnancy.

The study population was recruited from a tertiary referral center, so the results may be limited in generalizability, the researchers said. Self-reported smoking habits and the inability to examine morphological development more than 60 days after conception also limited the study.

“We were unable to examine the impact of quitting smoking or reducing the number of cigarettes. It would be very interesting to investigate the association between smoking cessation and embryonic development,” Rousian said. “In the future, we may be able to inform expectant parents using embryonic morphological development as a more reliable measure of health and development.”


ADD A SUBJECT TO EMAIL ALERTS

Receive an email when new articles are published on

Please provide your email address to receive an email when new articles are published on .

We have not been able to process your request. Please try again later. If you continue to have this problem, please contact [email protected]

What happens when you can’t repay a payday loan?