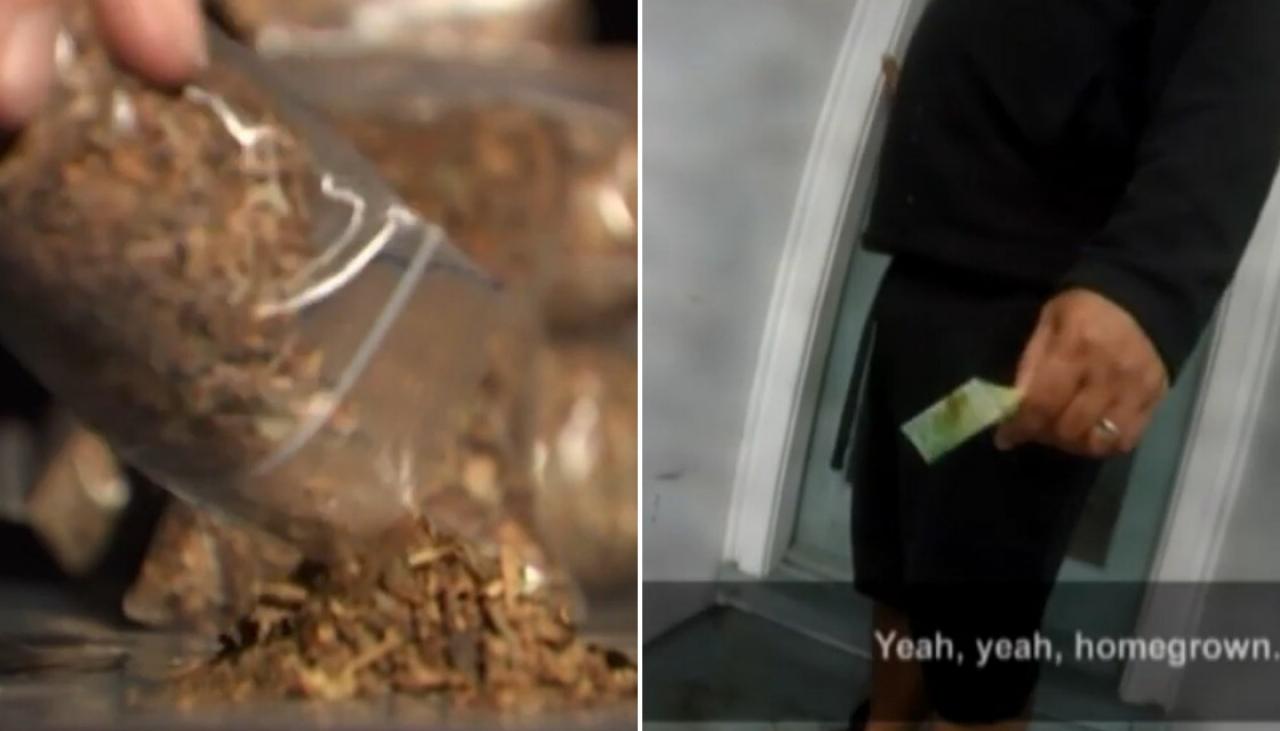 Newshub has discovered that the Tongan term for tobacco processing “malila” is being used online to market illicit products and avoid algorithms that could cause these pages to be taken down. And it’s not just local sales that are worrying the authorities.

At the border, Customs say illicit tobacco imported by organized crime groups into New Zealand accounts for around 80% of their anti-fraud team’s work.

It was a simple but illegal transaction at a house in the Auckland suburb of Glen Innes, where the seller told Newshub that the product we purchased was “homemade” tobacco.

The law states that you can grow 5 kilograms of tobacco for your personal use. But it is forbidden to sell it, or even give it away, unless you are registered with customs and pay excise tax.

The seller of the Glen Innes property told Newshub that he doesn’t pay tax and “everything is fine”.

Any tobacco sold is also supposed to carry health warnings. This product had nothing. So we went to another private seller – this time in Mangere. When we arrived we found it was the same price as the last house. Only $10 per bag.

The last stop was a house in Mount Roskill. It was the same situation. We left with the product, which was unbranded and without health warnings.

The three sellers announced on Facebook. They did not market products under the names of tobacco or cigarettes but used the Tongan name “malila”.

“Facebook uses algorithms that prevent you from selling anything associated with tobacco, so cigarettes, tobacco. But it’s often not sophisticated enough to pick up some of the colloquial terms,” ​​he said.

He said these types of sales are on the rise.

“Even in my own neighborhood, I can find seven or eight different sources in about five minutes,” he said.

Youden said that relative to household income, cigarettes in New Zealand cost more than anywhere in the world.

“We really need to see the government invest a lot more in helping people manage their withdrawal, and in communities to help people stay smoke free so that as legitimate supply is reduced it is not replaced by an illegitimate offer.”

We have had customs experts inspect the products purchased by Newshub.

Fraud and Prohibited Goods Team Customs Manager Nigel Barnes told Newshub “on the face of it” the product was being sold illegally as it was unlikely excise tax had been paid.

“The wrapper is just a plastic bag. There’s no health warnings or anything on it and it’s often a red flag that you’re dealing with illicit tobacco.”

The Department of Health told Newshub: ‘The example you provide fails to meet the requirements in several respects, and we are concerned to see it.

Since 2021, 47% of illegal seizures made by customs have come from China.

Customs Investigations Manager Cam Moore told Newshub it was an “emerging kind of crime for us”.

“I think we’re looking at about a dollar a cigarette. So 1 million cigarettes, $1 million.”

That’s a lot of money. In 2018, during an operation called “Whitehorn”, customs found $4 million in cash, all linked to the illegal sale of tobacco.

Moore said there are also parallels to the sophistication seen with meth smuggling, with international criminals setting up fake businesses.

The customs fraud team focuses on everything from document forgery to bank cards and alcohol excise fraud. But illegal tobacco dominates and now accounts for around 80% of their work.

A new dedicated tobacco customs investigation team will be operational next year – key to tackling a crime that threatens our Smokefree 2025 ambitions.

Save up to 45% this Labor Day weekend

Is banning smoking in hospitals a “useless exercise?”