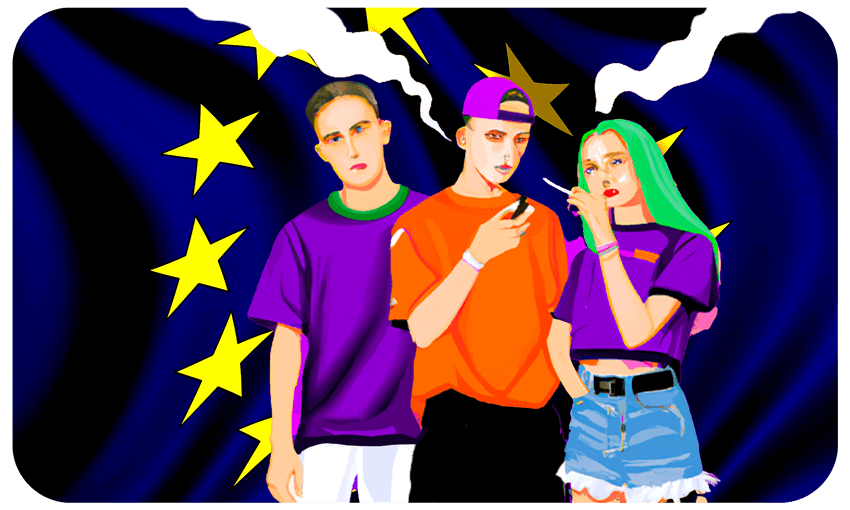 In New Zealand I was just an occasional smoker – it was way too expensive to be anything else. Everything changed when I went on vacation to Europe.

I walk down a street in Vienna. It is one of the hottest European summers on record. The sun kisses my bare shoulders. Cafes and restaurants spill people onto the streets.

On every street corner, there is at least one suave young man leaning against the facade of a century-old building, cigarette in hand. Everywhere groups of giggling girls, sitting on steps, delicate fingers rolling tobacco, smoking.

Another week, another European street.

This time I am in Corfu. Drunk, stumbling along the sidewalk, my amor de mi vida laughing next to me. In my hand is a pack of Marlboro Golds bought for five euros, the equivalent of 8 New Zealand dollars.

If I were to teleport to my small town in New Zealand, the same pack of cigarettes would cost me over $45.

Honestly, I’m stunned by how cheap it is to smoke in Europe compared to the exorbitant costs back home.

Drinking Aperol spritz on the deliciously warm Greek evening, we smoke almost the whole package. Every outdoor table in the old town bar is full of young people doing the same, filling the air with smoke and laughter.

I have never seen so many young people smoking.

Growing up in New Zealand, I was taught from day one in primary school how bad smoking is for you. Public areas have been marked with forest green Smokefree signs.

My grandfather, an excessive smoker in his youth, had throat cancer. The moral of his story was passed on to me: stay away from cigarettes. It was a dangerous habit that would coat my lungs with tar, creating smooth black roads from my bronchi and bronchioles.

I grew up knowing that New Zealand was aiming to be completely smoke-free one day in my life.

Once I started studying at university, curiosity naturally got the better of me. I was not alone. Escape to the deck of any nightclub to escape the sweaty crowds and heavy bass and you’ll find plenty of young people smoking cigarettes or vaping.

Before this year, however, I had never bought my own pack of cigarettes. I was content with a puff or two from someone nearby with a lit cigarette in my hand.

Most people I’ve noticed outside New Zealand nightclubs are vaping. Those who smoked cigarettes were unlikely to offer you a whole pack, even if you asked nicely.

In New Zealand, it is far too expensive to give away your cigarettes.

FLet’s move on to the last four months I’ve spent traveling around Europe. I ask for a puff and I’m given a whole cigarette and I’m welcome to ask for more.

I spent time working from home alongside three young Brits who stop for a literal smoko break several times a day. A Swiss friend makes several packs a day and needs snus (a small pouch of powdered tobacco placed behind the upper lip) if he is not inhaling.

None of my friends in New Zealand smoke like that.

Twenty-nine per cent of the EU population aged 15-29 smoke. By comparison, the current smoking rate for 18-24 year olds in New Zealand is 11%.

Europe has made efforts to reduce the number of smokers. France, like New Zealand, applies high taxes on cigarettes, but the illicit market is growing every year, driven by local demand.

Using the example of New Zealand, preventing young people from smoking depends not only on tobacco control policies and stricter regulations, but also on societal changes and attitudes.

Research indicates that if you can live to be 25 without tasting a cigarette, you’ll probably never smoke.

With fewer adults smoking and packets of cigarettes hidden behind nondescript cupboards in supermarkets, it’s out of sight, far from the minds of many young New Zealanders.

If you’re thinking of buying, the lavish prices often make you stop and wonder if it’s necessary.

On July 27, New Zealand took another step in its plan to be smoke-free by 2025. The Smoke-Free Environments and Controlled Products (Smoked Tobacco) Amendment Bill was adopted at first reading in parliament.

If the bill passes, it will be illegal to sell tobacco to people born in 2009 or later, creating an entire generation smoke-free.

In Europe, however, smoking is the norm. I would even say, based on my own behavior here, that it’s romanticized and mixed with European culture. It’s as much a part of everyday life as drinking an espresso.

The low prices make it even more accessible.

The European Union is targeting less than 5% of the population who use tobacco by 2040, but societal attitudes continue to hinder progress.

New Zealand is winning the war on cigarettes, but the next challenge is vaping.

While the number of people aged 14 to 15 who smoke daily continues to drop, reaching an all-time low of 1.3% last year, vaping rates are actually rising.

If New Zealand is to achieve its smoke-free goals, more attention needs to be paid to young people who vape.

Vaping, initially promoted as a way for smokers to quit smoking, is now becoming a gateway for younger generations to get that head rush.

And it’s my generation that’s going to be the guinea pigs for what vaping really does to us in the long run.