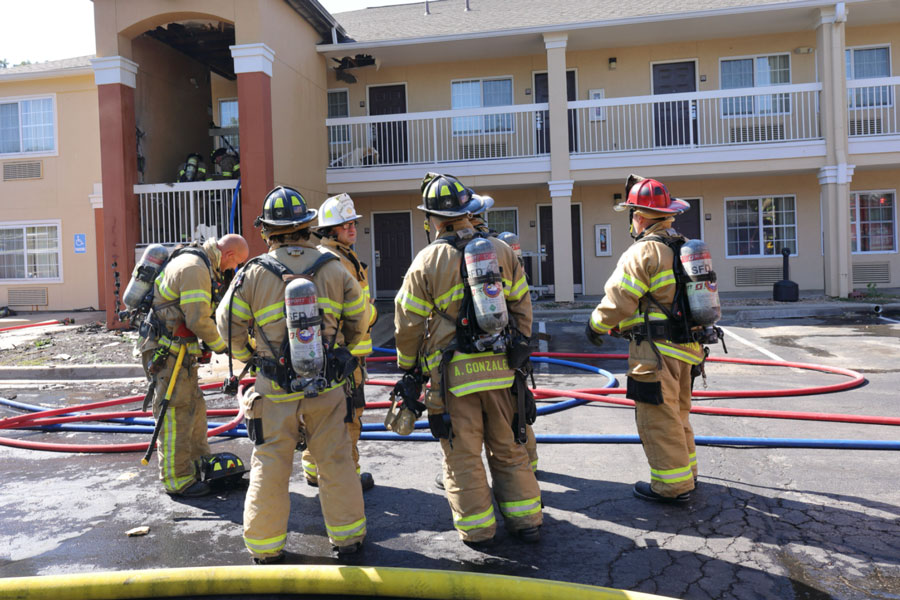 Overland Park and Shawnee firefighters were called to the Extended Stay America hotel in Merriam on Tuesday afternoon at 6455 East Frontage Road. Crews could be seen breaking through the facade of a stairwell, looking for hot spots. Investigators have yet to publicly determine a cause. Photo credit Mike Frizzell.

An attic fire at Extended Stay America in Merriam that forced the evacuation of several residents on Tuesday afternoon was likely caused by a carelessly discarded cigarette, investigators said.

Overland Park and Shawnee firefighters were called to the hotel at 6455 East Frontage Road at approximately 1:50 p.m.

A caller in a second floor unit reported that alarms were ringing and smoke was visible.

Merriam Police were the first to arrive at the scene and reported that the fire had started on the east side of the building.

The fire was brought out in about 10 minutes.

Jason Rhodes, the spokesperson for the Overland Park Fire Department, said there had been no damage to the living units and no injuries had been reported.

In a statement later Wednesday morning, Rhodes said the cause was “the negligent discharge of smoking materials”.

“Probably a cigarette butt in the mulch that communicated into the void of the pillar at the edge of the southern stairwell,” Rhodes said in her statement.

Firefighters pierced the facade of the building around a stairwell to check for hot spots.

Rhodes said the fire did not reach the main part of the building, nor the living rooms.

There was also no structural damage to the burnt stairwell, which Rhodes says is still usable.

Heart attack: if you do this while sleeping your risk is higher than smokers, BP patients