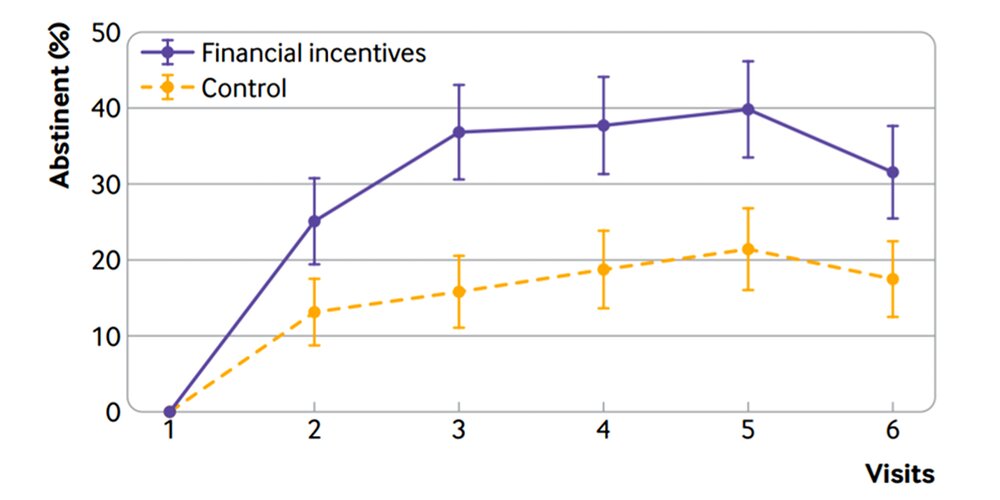 Even if pregnant women are aware of the health risks, they can continue to smoke. Nicotine replacement therapies, such as patches, appear to be less effective for pregnant women than for the general smoking population. Other methods of support, such as specialist counseling or cognitive behavioral therapy, do not work well for pregnant smokers. Thus, 25% of pregnant women smoked at least occasionally (and 22% were daily smokers) in France in 2017.

This long-standing trend is too high considering the health risks for newborns and mothers. It is therefore necessary to explore other therapeutic avenues to help pregnant women quit smoking. Economic theory indicates that financial reward can lead to health behavior change.

Why would offering financial rewards change a health-related behavior?

Although smoking is primarily an addiction, quitting smoking, like any other decision, is the result of a trade-off between costs such as loss of satisfaction from smoking and the effort required to quit, and the benefits. such as money saved from not buying cigarettes and perceived improved health from quitting smoking.

Offering financial rewards to people who quit smoking could compensate for their efforts and the loss of satisfaction from smoking. Financial rewards would affect the trade-off so that the benefits of quitting smoking would outweigh the costs.

Would it then be effective to offer a financial reward to help pregnant women quit smoking? To find out, we set up a randomized trial involving 460 pregnant women in 18 maternity wards in France. Our study, published in the British medical journalaimed at testing the effectiveness of financial incentives conditional on smoking cessation among pregnant smokers.

The participants, all in their first trimester of pregnancy, were randomly divided into two groups of equal size: a financial incentive group receiving financial incentives conditional on abstinence and a control group that did not. Monthly face-to-face visits were planned, including routine medical advice and smoking cessation until the end of pregnancy. At each visit, pregnant women met health professionals specifically trained in smoking cessation techniques.

Participants’ smoking abstinence was assessed by self-report of smoking and by a test measuring the level of carbon monoxide in expired air, a standard measure of smoke exposure. At each visit, participants in the financial incentive group received vouchers, the amount of which depended on their current sobriety, and their past sobriety. The more abstinent they were, the greater the amount of financial rewards. The maximum amount that could be won in the study was 520 euros. Each €20 voucher could be redeemed in many shops (including groceries, childcare equipment, etc.) but it could not be used to buy tobacco or alcohol.

The financial incentive scheme has been specifically designed to encourage continued abstinence throughout pregnancy, as only continuous abstinence can have a major impact on the health of the newborn.

These results translate into better health outcomes for newborns. Newborns were less likely to have low birth weight, a known predictor of adverse perinatal and infant health events. Poor neonatal outcomes (transfer to neonatal unit, seizures, malformations, and death) decreased by 5.3 percentage points among newborns of participants who were in the financial incentive group compared to those in the control group. The intervention had no effect on prematurity.

Would public health authorities implement financial incentives in the health care routine of pregnant smokers? Our results show that providing financial incentives conditional on abstinence is effective in increasing smoking cessation rates throughout pregnancy and improving birth characteristics. But the evaluation of the impact of this measure should not be limited to this period of life. Healthier newborns can also become healthier children than adults.

Before choosing to implement such an unusual policy, policy makers may consider how it would be perceived by the general population. We had precisely assessed its acceptability before carrying out our study, by surveying a representative sample of the French population. More than 50% of respondents are in favor of this type of policy. As other studies from other countries have shown that the acceptability of financial incentives increases when proof of effectiveness is provided, we are convinced that this policy could be widely accepted in France.

Provided by The Conversation

This article is republished from The Conversation under a Creative Commons license. Read the original article.

This document is subject to copyright. Except for fair use for purposes of private study or research, no part may be reproduced without written permission. The content is provided for information only.

Back up when you have nothing to back up