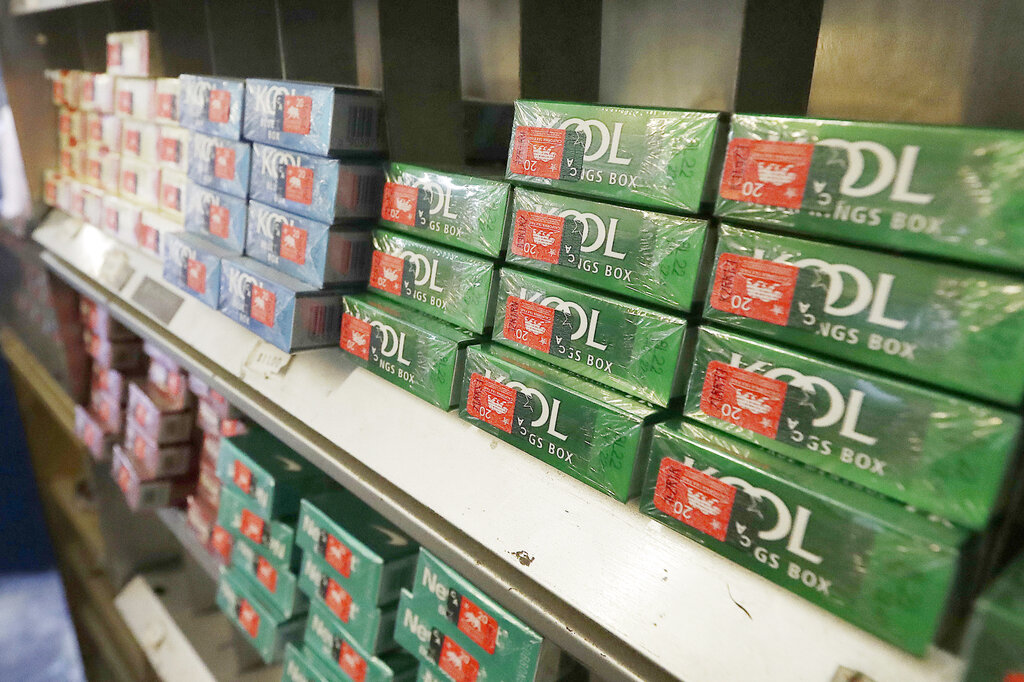 WASHINGTON (AP) — The U.S. government on Thursday released its long-awaited plan to ban menthol cigarettes and flavored cigars, citing the toll of smokers and black youth.

“The proposed rules would help prevent children from becoming the next generation of smokers and help adult smokers quit,” Health and Human Services Secretary Xavier Becerra said in a statement.

He added that the ban would also be an “important step in advancing health equity” by reducing disparities in tobacco-related disease.

The Food and Drug Administration has said eliminating menthol cigarettes could prevent between 300,000 and 650,000 smoking-related deaths over 40 years.

Menthol accounts for more than a third of cigarettes sold in the United States, and the mint flavor is preferred by black smokers and young people. The cooling effect of menthol has been shown to mask throat stiffness caused by smoking, making it easier to start and harder to quit.

The FDA said it would also seek to ban menthol and dozens of other flavors like grape and strawberry from cigars, which are increasingly popular with young people, especially black teens.

The agency’s proposals on cigarettes and cigars are only initial drafts and are unlikely to be finalized until next year. Companies would then have an additional year to phase out their products. Legal action by the tobacco industry could delay the ban for years, experts say. For now, FDA officials said they would take comments for two months and then proceed “as quickly as possible.”

Altria, which sells menthol cigarettes and flavored cigars, said it disagreed with the ban.

“Removing these products from the legal market will push them into unregulated criminal markets,” the company said in a statement. “We will continue to engage in this long-term regulatory process.”

The FDA has repeatedly attempted to get rid of menthol, but has been rebuffed by Big Tobacco, members of Congress, and competing political interests under Democratic and Republican administrations.

Recreational marijuana is on sale in Maine

Menthol is the only cigarette flavor that was not banned by the 2009 law that gave the FDA authority over tobacco products, an exemption brokered by industry lobbyists. The act, however, asked the agency to continue to weigh a ban. To date, the FDA has yet to eliminate any traditional tobacco product, despite having had that authority for over a decade.

Last April, the Biden administration pledged to try to ban menthol within a year, responding in part to African-American groups who say menthol has led to lower quit rates and increased death rate among blacks. Menthols are used by 85% of black smokers.

“Black people die disproportionately from heart disease, lung cancer and strokes,” said Phillip Gardiner of the African American Tobacco Control Leadership Council. “Menthol cigarettes and flavored cigars have been major vectors of these diseases in black and brown communities for a long time.”

In 2020, Gardiner’s group and several others filed a lawsuit to force the FDA to make a decision on a ban.

More than 12% of Americans smoke cigarettes, with roughly identical rates between white and black populations.

In 2019, more than 18 million Americans smoked menthol cigarettes, with higher rates among young people, African Americans and other racial groups, according to the FDA. Menthol smoking declined among white teens between 2011 and 2018, but not among black and Hispanic youth, the agency noted.

Thursday’s proposals would not apply to e-cigarettes, including big brands like Juul and Vuse, which come with menthol. The FDA has conducted a separate review of vaping products and has so far approved a handful of tobacco-flavored products from smaller manufacturers.

The FDA made several efforts to begin phasing out menthol cigarettes during the Obama and Trump administrations, but had never previously released an official roadmap on how to accomplish the ban.

“This is the first time there’s been administration support,” said Mitch Zeller, who recently retired after nine years as head of the FDA’s tobacco control center. “If these rules are finalized, they become the law of the land and it becomes illegal to sell menthol cigarettes and flavored cigars.”

In recent weeks, dozens of interest groups — for and against the ban — have met with Biden administration officials to try to influence the proposed rules, which would wipe out billions in tobacco sales. Conservative and civil rights groups that accept tobacco funding have warned officials that banning menthol could lead to increased policing in black communities.

Mr. Irrelevant: Being picked last in the NFL Draft has its perks

While acknowledging those concerns, FDA Commissioner Robert Califf stressed that the agency’s rules would target businesses, not smokers.

“These actions and related enforcement actions would be the responsibility of the tobacco industry, not the people who own or use these products,” Califf told reporters.

For decades, tobacco companies have focused menthol advertising and promotions in black communities, sponsoring music festivals and neighborhood events. Industry documents released in litigation show that companies view menthol cigarettes as a good “starter product” because they are more palatable to teenagers.

Eliminating menthol would be a blow to tobacco companies, including Reynolds American, which sells major menthol brands, Newport and Kool. With the slow decline of smoking, tobacco companies have branched out into alternative products, including e-cigarettes and tobacco pouches. But these companies still represent only a tiny fraction of the industry’s sales.