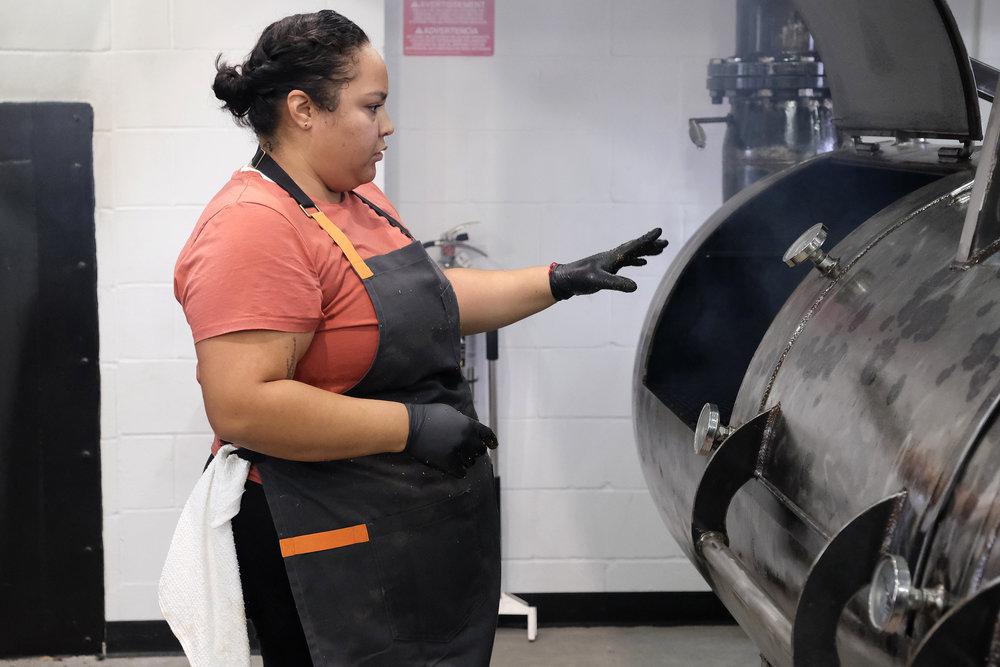 Brisket Challenge no problem for our hometown girl Evelyn Garcia

Spoiler: I screamed so loudly at one point in the fifth episode of Top Chef Houston that my former dog, dozing on his bed, ran up to me with some concern.

Well, of course, I got upset. The stakes were high for this Texan and for the town I call home. A Brisket Challenge was underway, in the large, gleaming smokehouse of the new J-Bar-M Barbecue.

Guest judge Greg Gatlin and 20-count-’em-20 of Houston’s top pitmasters had been called in to help pass judgment on the new wave of competitors on this legendaryly demanding cut of beef.

I wasn’t clear why Los Angeles chef and restaurateur Brooke Williamson, a former Top Chef winner, was acting as the master of ceremonies for the brisket. Of course, she is telegenic. She had her hair in modern cowgirl French braids. And she was wearing a denim jacket, I guess to mean Texas. But she seemed an odd choice to explain that Houston chefs had been busy, in the age of our barbecue renaissance, coming up with multi-cultural ideas like brisket fried rice, brisket rolls and pho to Chest.

Was Dawn Burrell busy that day? I wondered grumpily.

The Houston Season airs at 7 p.m. Thursdays on Bravo.

Nonetheless, when Williamson led the 10 chefs to the smoking room with a “Follow me, I’ve got some cool things to show you,” I fell in line. Cool things indeed, those mighty Moberg smokers that are the pride of this new EaDo barbecue palace. They huddled in rows like shining, implacable gods.

Over the course of the hour, these majestic tubular presences have become characters in their own right. I’ve had the chance to inspect J-Bar-M’s smokers up close, and they inspire awe. Perhaps even fear in a leader who has never placed offerings inside.

Pitmaster J-Bar-M Willow Villarreal, one of Houston’s biggest brisket enthusiasts, was on hand to help the chefs through the process as they picked their briskets, cut them, seasoned them with a rub and tucked them in for a long time, slow smoke. He was his usual shy, gentle presence, and I kept wishing the sound team had picked him up better to catch his pearls of wisdom.

Jackson’s admission that “Texan beef brisket is one of the hardest things to do right” had me nodding in approval. Respect is appropriate, please.

It was no respect for Texas Toast, a Quickfire Challenge was thrown at the 10 chefs when they returned from shopping for their barbecue ingredients. When Tom Colicchio called Texas Toast “classic barbecue side,” I blurted, “No, it’s not.” There was grumbling. And misfortune takes. When talented baker Monique and modernist dude Buddha both decided to make multi-layered versions of mille-feuilles, I wanted to issue a warning cry of “unclear concept”.

It was a relief when the Quickfire ended and Nick, with his BLT Texas Toast, won the day. Three kinds of tomatoes, wilted greens and pancetta with its fat mixed with a Colby Jack cheese spread? I would eat this and ask for more. I shot for Nick and his unaffected kitchen, and it was nice to see him rewarded.

Back to 10 breasts and 10 breast ideas. The Buddha notion of a Boeuf Bourguignon caught my eye. The rustic French original is one of my favorite dishes, and I was curious to see his high-concept version unfold around cubes of smoked bacon that he braised in a rich jus made from the toppings.

Jackson’s scarpanocc pasta (it was a new shape for me!) stuffed with beef brisket also caught my eye. He laughed at himself for grinding up the meat he worked on, as he usually does. When they cut him meditating to calm his anxiety, I began to understand where his humor was coming from: better to laugh at yourself before others do.

But a genuine joy of absurdity also informs his humor. I find myself enjoying it more each week. I almost forgot that I considered him a COVID man.

Evelyn’s brisket curry idea made my heart sing. I can’t help cheering on our local heroine, with her radiant smile and contagious laugh. She was thrilled to finally be able to show off a curry.

After reveling in one of her multi-course pop-up dinners over the weekend, I was eager to see how she would structure the curry dish. When she took care of the charred brisket crumble she was going to use as a finishing touch, I thought, yes! There are those layered textures that you are so good at.

And guess what? These three dishes that piqued my interest the most ended up in the top three of the challenge. I wanted to try them all. Buddha placed delicate petals of raw beets on his Burgundian-style brisket, with deep “bar-b-juice” as the sauce, beef fat potato and mushrooms on the flanks, along with jam caramelized onions and a nice little hot plate. roasted and double-smoked bacon on top.

When Chef Ara Malekian of Harlem Road BBQ said, “I have all the little intricacies of flavor in a beef bourguignon,” I could almost taste them myself. Plus the smoke, of course.

Malekian was tagged by graphic designers when he made the remark. I only wish all the pitmasters in Houston gathered in the J-Bar-M dining room had been treated like this. It was frustrating to get a glimpse of this one and a fleeting word of that one without the correct identifiers.

But I had to admit, it was a treat to see so many faces of the city’s tight-knit barbecue community – and to reflect that 10 years ago, putting together so many brilliant barbecue lights here would have been a challenge.

Jackson’s stuffed breast pasta ended up with burnt ends and a cornbread crumble on top. He had made a kind of red butter with North Carolina Gold barbecue sauce, and his name – “butter-becue sauce” – made me laugh out loud.

When it came to Evelyn’s brisket curry, however, the judges went a little crazy. From its aromatic rice base, to its slice of brisket, its pickled relish and herb bun, to its fried garlic pistachio crumble and burnt ends, they couldn’t stop talking about it. Padma loved the curry base itself and its ‘smooth’, properly cooked spices. Gail noted the bold flavor, the aromatics, the warmth that “didn’t annihilate”.

“I want to tell him, just put a pan on my back and let me go with it,” Greg Gatlin said.

At this point, I was jumping out of my skin. When Tom said that on a menu, Evelyn’s curry would be a signature dish — “people will come for that, it’s like destination food” — I finally let myself believe she could win the night.

And she did. At that moment, I let out that scream.

Everything that followed was an anticlimax for me, if not for viewers less invested in the outcome. Ashleigh, whose paddling pools had become increasingly painful for me to watch, was sent home for an over-complicated kale soup that had a hard-to-eat piece of blah brisket in it. I felt bad for her. After being so revered for his work in Asheville, that must hurt.

I turned off the show with Tom’s last remark to Evelyn ringing in my ears. “For 19 seasons and all the curries that have been attempted on the show, Padma has always had issues with them.”

All in the Mind – Tobacco Reporter