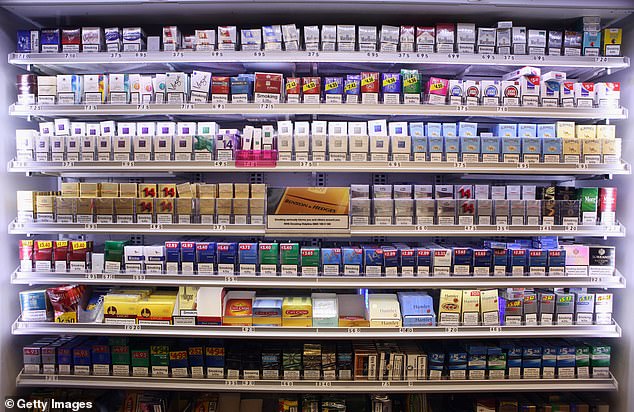 By James Gordon for Dailymail.com

The policy would see the amount of nicotine reduced to “non-addictive levels”.

Although it probably wouldn’t come into force for several years, the decision would likely disrupt the entire tobacco industry.

Smokers do not have to worry too much in the short term about a number of obstacles that remain to be overcome.

The Food and Drug Administration must first outline the proposed new rules before inviting public comment. Then the final rules would be released.

Even then, tobacco companies could sue, which would likely delay any implementation of the policy, reports the Wall Street Journal.

The administration had been considering whether to pursue the policy under President Biden’s Cancer Moonshot initiative, which hopes to reduce cancer deaths by at least 50% over the next 25 years.

The move would be the government’s biggest step in tackling smoking since 1998, when tobacco companies paid more than $200 billion to help states pay for health care.

New restrictions on marketing were also agreed at the time, including a ban on free samples and billboards.

This policy would be a step in President Joe Biden’s Cancer Moonshot plan. Launched in February, the plan aims to reduce the cancer death rate among Americans by at least 50% over the next 25 years.

The FDA describes nicotine as “an addictive chemical found in cigarettes and other tobacco products.”

Although nicotine is addictive and makes people addicted to cigarettes, the chemical itself does not cause cancer, heart disease or lung disease.

The Centers for Disease Control and Prevention blame other harmful compounds in cigarette smoke that are linked to more than 480,000 deaths in the United States each year,

The CDC calculates that there are 30.8 million smokers in the country, or about 12.5%. The numbers increased slightly in 2020 during the pandemic.

The amount of nicotine in cigarettes can be reduced by various methods, including adjusting the tobacco leaf blend or using different types of paper or filters.

The CDC calculates that there are 30.8 million smokers in the country, or about 12.5%

A company would even be able to reduce the amount of nicotine in its tobacco leaves by 95% thanks to genetic engineering compared to a typical tobacco plant.

FDA officials say reducing the nicotine in cigarettes to very low levels would prevent future generations from becoming addicted to cigarettes and make it easier for current smokers to quit the habit.

A reduction in nicotine in cigarettes was initially sought by the Trump administration in 2017, but in 2019 officials scrapped the plans.

The New England Journal of Medicine estimates that reducing nicotine levels would cause 5 million more adult smokers to quit within a year of its implementation.

“If it works, it will save more lives than anything else the FDA could do.” said FDA Commissioner Robert Califf.

The move would likely be a blow to the tobacco industry, but could see an estimated five million people quit within a year of its implementation.